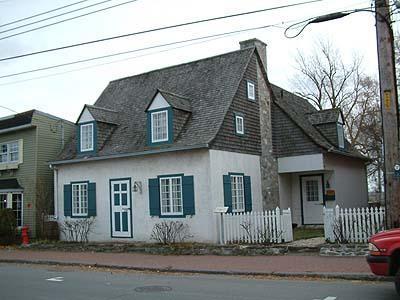 This old farmhouse was built around 1710 and is one of the oldest buildings of Pointe-Claire . This is an example of vernacular architecture , recognizable by its main building seated on the ground, its high roof covered with cedar shingles, its paned casement windows with shutters and its timber piece on coated piece of plaster. The house also includes a massive stone fireplace fitted with a bread oven. Some elements , however, are additions subsequent to its construction, such as dormers and rear annex.

The house is located on lot 88 of the existing cadastre, which forms part of Lot #154 on the island of Montreal. Lot 154-D was conceded by the Sulpicians to Pierre Sauvé said Laplante 24 Nov 1698. It was then three acres of frontage on Lake St. Louis, 20 deep. Pierre Sauvé and his wife Marie-Michel sold the land to Jean Desrosiers said Du Tartre 27 Oct 1700. The lot has not changed. The two following transactions took place on the same day, September 19, 1706. Initially, Du Tartre gave the concession to Madeleine LeMoyne, widow of Jean-Baptiste Beauvais, who was assignee of the neighboring land. Ms. LeMoyne immediately sold the land 154-D to Antoine Pilon, who had already bought her land adjoining 155-D. Marie-Anne Brunet, who inherited the land on the death of her husband Antoine Pilon, donated to their son Matthew on January 22, 1729. The deed implies a land of five acres in front by 20 deep, formed Batch 154-D and 155-D. It is also the first document to report the presence of a "small house" with barn. The house has been built between 1706 and 1729. But as the Pilon inhabited the house, we just believe that it was built shortly after the acquisition of the concession, so in the summer of 1707. Gabriel Pilon, son of Mathieu and Marie-Josephte Daoust and occupant of the "family home" became the next owner by acquiring the lot 154-D when measured on 3 acres 28. The innkeeper & farmer, Pierre Pilon, son of Gabriel Pilon & Suzanne Meloche, inherited the land Dec 7, 1799. The Pilon's finally left the lot, on 1 Jul 1826 when they ceded to carpenter, W. Glasford. They were father to son owners for 120 years. Subsequent owners were: Felix Amesse, carpenter, husband of Marguerite Pilon (for purchase on 1 March 1832); François Larivée, a cobbler (for purchase April 5, 1834); Jean-Baptiste Legault dit Deslauriers, son, painter, (for purchase May 11, 1865); Damase Alexandre Valois (by purchase 19 Jul 1873); Isidore Valois (by inheritance in 1914); Charles Benedict Valois (purchases Dec 31, 1921); Joseph Duhamel (by purchase 21 Feb 1944); André Charbonneau (the current owner) finally in 1968. By the time he left home in 1976, after having lived there for a few years, André Charbonneau conducted a thorough curettage, with the intention to restore the house. He also attempted to register his home as a historical monument with public authorities, without much success. Given the scale of the work, André Charbonneau made three major decisions: he would raze the house floor by numbering all the stones and the planks, he would rebuild, restoring its original appearance, not that of 1850, and he would add an extension to enlarge it. Only the skylights betray the spirit of the early eighteenth century, as they have appeared in the middle of the century rather than the beginning. For the construction of the addition, Charbonneau visited many demolition yards in the Montreal area to find the missing pieces of wood. For the construction of the farms two pitched gable roofs, he had to resign himself to use new wood. The front offers a rhythmical and symmetrical order, typical of vernacular inspiration of Norman architecture. The inside of the original house was built as it was in the eighteenth century. One piece occupies the entire ground floor as then, forcing Charbonneau to be resourceful to ensure the solidity of the house. The reconstruction of the house proved a great success given the scale of the task. The artisan talent like Robert Lardeux (stone), Pierre coupal (carpentry and stairs) and Marcel Household (hardware), is obviously no stranger to this situation, but without the determination of André Charbonneau, this old wooden house have given way to another soulless modern building.