In New Zealand, from 1846, various militia, including Maori Police units were combined as a national force to police Maori hostilities and civil order. An Armed Constabulary was Sir George Grey's pet project during his first term as Governor of New Zealand. Unable to rely on the British Colonial Forces who were responsible to their own commanders, who in turn received their orders from London, Grey wanted a force he could rely on , a local colonial force under his own command, ready to act on the instant, without question wherever and whenever needed. [1]

Modeled on the Irish Constabulary, the first New Zealand Armed Constabulary was formed in Wellington and included a number of young Maori. This force saw active service in operations against Te Rangihaeata near Wellington, and again in 1847 in Wanganui, and after that was largely employed on policing duties though they remained armed.

The Colonial Defence Act of 1862 raised a new Colonial Defence Force of mounted troops; up to 500 volunteers engaged for a three-year period of service; including Maori and Europeans. There were nine divisions each of 60-80 men, including two Maori Divisions. [2] [3]

Before a telegraph system was installed through the bush, Maori and Colonial military or Constabulary messengers were used to carry letters and obtain information. Men with Irish Constabulary training were sought after, valued for their reliability, discretion and ability to act independently when carrying official communications to both colonial settlers and Maori during the years of New Zealand's land wars.

The Armed Constabulary Act of 1867 replaced the Colonial Defence Force following the end of the land wars and the withdrawal of British and Australian Imperial Forces from New Zealand, and abandonment of the Military Settlers' Scheme [4] [5] [6]

Along with men transferring from the disbanded Colonial Defence Force and Forrest Rangers' "literate, fit, experienced men of character" were invited to apply for positions in the new Constabulary. The Armed Constabulary was to be a new paramilitary police force and include Maori recruits; with both mounted and light infantry organized in mobile flying columns capable of dealing with the scattered and ever-continuing outbreaks of Maori hostility such as Te Kooti's defiant exploits in the Bay of Plenty. [7] In those early days on New Zealand's colonial history, cash was hard to come by; men joined the Armed Constabulary for short periods, often just long enough to earn sufficient cash to fence a paddock or to go gold mining. Local government in New Zealand was underfunded and Constabulary Officers were often seconded as clerk/messengers to government offices.

Firstly - The Armed Constabulary was on military duty, at all times ready for action. They patrolled regularly and sent out scouting parties, their mission was to know what was going on and to pre-empt any trouble brewing. Courage, tact and ingenuity were personal qualities valued by the Constabulary and invaluable in dealing with situations not covered by official guidelines. The men of the Constabulary were encouraged to fall back on their own resources when dealing with difficult situations like searching for overdue travellers. They provided valuable service as knowledgeable armed escorts for officials travelling through the bush, and provided colour and ceremony appropriate to official occasions in town.

Secondly - The men of the Constabulary undertook civil duties, perhaps aiding a Coroner, or acting as clerks in a Magistrate's Court.

Thirdly - The Constabulary undertook public and "useful works" building bridges and roads in the interest of opening more of the country for settlement. In 1871, the authorities adopted a system of keeping the officers and men of the Constabulary "constantly and usefully employed in road and other works. This kept the men fit and out of trouble. "The health, vigour and activity of the men who by being thus inured to constant active employment are prepared if called upon suddenly to take to the field from the hardships and fatigues inseparable from long marches in rugged country when encumbered by the weight of arms, tools, food and other indispensable necessaries." [9]

The Constabulary had no separate Ordnance corps. In the field, they provided their own artillery.

Through Taranaki and the Waikato, a chain of Constabulary posts built within sight of each other and equipped with signal posts for semaphore kept the region safe. Of all pioneering efforts, this work of the Constabulary probably made the greatest contribution to the development of New Zealand.

According to the recollections of An Old New Zealander [10] "It was quite a misnomer for the term Constabulary gives the impression that it was more or less a kind of Police Force but that was not so at all. It was distinctly a field force and while there was always a detachment in the barracks in Wellington from which the Government House Guards and special escorts were drawn, the whole of the main force was spread over districts where Maori disturbances chiefly occurred. In its earlier days, 'the Old Force' was considered 'the thing' and many adventurous spirits joined it. Young Englishmen coming out from England with special introductions would choose the Force in preference to positions in the Civil Service ..... It had always been quite distinctly a Frontier Force stationed beyond the outposts of civilization ..... a man's life with not a little of adventure.

In the main division of the Old Force there was a great mixture drawn from many parts of the world and from every walk of life. There were men from the Mounted Forces of Canada and the USA, Cape Colony and Australia, ex army officers and soldiers from Home and India and quite a number of all ranks from regiments that had been stationed in New Zealand. Some Prussian, Polish and Austrian ex-officers - one a Polish Count. One of the sergeants-major was an Italian of rank who, with a desire to hide his identity, passed under a very common English name ..... There were doctors and medical students ..... one a Dublin man of extraordinary proportion about 6'4" in height with a breadth of shoulder and depth of chest exceeding by far anyone I have ever come across ..... there were many university men of various or no profession ..... there were several of the teaching profession. Altogether there was a wide range but on the whole a very fine lot of men with of course a good sprinkling of somewhat wild and decidedly adventurous spirits who I doubt not add greatly to the zest in the life of the Force. 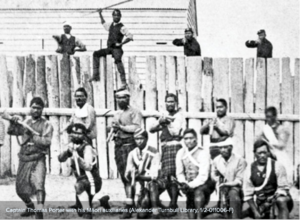