[send private message]
This page has been accessed 86 times.

In the 1890s, Iowa was a land of opportunity and still working out the conflicts between farmers and ranchers. Young men like the Rahm brothers, called "the Rahm Boys of Prairie" by the newspaper, tended to take matters into their own hands rather than call the sheriff or bring suit in court.

An article headlined "Cattle herd conflict from Kossuth county, the Rahm Boys from Prairie on their way" which ran 17 June 1891 told of a problem at the herd grounds at Tuttle Lake. Cattle being herded to market on the hoof had gotten out of control and were damaging crops about 50 miles north. Some of the cattle were attached for damages by area farmers.

The Rahm brothers of Prairie Township were among other owners who chose to ride to the herding ground and challenge the farmers' claims to their stock. This would be Al Jr, and Albert; possibly Bob but was he was much smaller physically.

For this time period, such hands-on justice wasn't uncommon. Farmers and stockmen were on their own much of the time to protect against predators or resolve neighbor disagreements.

The newspaper editorialized that 'might makes right' attitudes made a bully of Albert. "..a brute, who has assaulted numerous parties...was obliged at one point to leave the county but unhappily for the community has returned." [1] There were several articles following a fight that put Albert in jail. Apparently in Fall 1898, Albert was fighting with Dominick Stufflick and Herman Necker, who worked for Stufflick, cracked Rahm over the head with a club and partially paralyzed him. Albert had facial paralysis and only recently recovered his bodily strength. Necker had been avoiding Albert but both went to a gathering in February and Necker wasn't able to escape due to deep snow. Necker shot Albert but then his gun misfired. Albert took the gun and shot Necker three times, once through the groin and two that missed. Both men were injured but not mortally. The issue went to a jury trial and Albert was found guilty of assault 16 Mar 1898 and was sentenced to a year at hard labor. The sheriff reported that Albert wished to work rather than lie in jail and would be sent to work at the Poor Farm. Sometime after that, public opinion shifted. A petition to pardon Albert Rahm on 28 Sept 1898 was sent to Gov Shaw, signed by the leading men of Algona. He continued to serve his sentence the full year but on 12 Apr 1899 the county resolved that his work at the Poor Farm had paid off the $186.67 + interest judgement of the State of Iowa vs Albert Rahm, and they should call it even.

That was when his older brother Al Jr sold out and moved to South Dakota and named his first son for his brother. Land was cheaper there but Al may also have decided that the he needed fewer rules. The land was sparsely settled when he and his wife Mary bought land and later homesteaded a section in Spink County.

Albert also left Iowa. In 1903 he married Annie E Cassel from Missouri; unclear where they met or were married. In 1910 they were farming in Hughes, South Dakota with a 5 year old son Sylvester. [2] By 1920 they were back in Missouri farming. By all accounts they were a happy family and a credit to the community until Albert died in 1921 in Findley Township Missouri, of sarcoma at age 48. [3]In 1930 Annie was living in Missouri with Sylvester and his wife. [4]

Alois Sr left Iowa in 1908, much to the dismay of his youngest daughter Ella who was 12 years old and socially locked into Iowa. She kept up correspondence with her friends there for the rest of her life. But Alois Sr was 63 years old and may have been looking for lighter work and a little help from his sons. He bought 66 acres in Spink, South Dakota, which was a modest size.

The older children had married and made lives of their own. Tressa Rink had a hotel or boarding house in Iowa, which was successful. Emma Katie died in infancy and Emma Elizabeth died of consumption as a newlywed in 1894. Caroline Bambula moved to Illinois. Bob had married in South Dakota in 1907. Clara Rose Busse stayed in Iowa but later kept house in South Dakota for her brother Fred with her children. The twins, Fred and Henry plus brother John, were just coming of age and interested in affordable land in the Dakotas. Mary Louise had married Thomas Worlie in 1906 and they moved to Dakota. And the youngest--Susie, George and Ella---did as they were told and packed up.

Al Jr was still known as a 'my way or the highway' farmer in South Dakota, which was still unorganized and sparsly settled. He worked hard and his children worked hard on the farm. The town wag in Turton (Quentin Miles) said there were mnemonics to keep track of the names of Al's sons-- Frank, Abel, Charlie, Mike--implying that they were otherwise indistinguishable.

More editorializingers in the neighborhood prior to fight with Necker. 9 Feb 1898, Wed. Algona, Kossuth, Iowa, USA. [7] 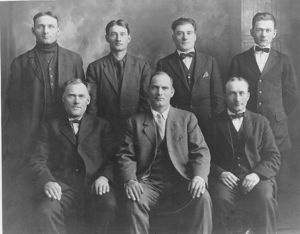