Stewart Adams was born on 16 Apr 1923 as a son of a railwayman in a rural area. At the age of 16 he left school and did an apprentice at a pharmacist. The pharmacy chain Boots sponsored him to go to University In 1942. At the University College Nottingham (later Nottingham University) he was awarded a Bachelor degree in Pharmacy in 1945. Because he was a student he was not drafted for World War II. After his Bachelor degree he had worked in the area of Penicillin research. He then added to his degrees a PhD of Leeds University, for which he got a studentship of Boots and the Pharmaceutical Society. After he finished his studies, Boots put him into the research department to find something against Rheumatical Arthritis which doesn't have the side effects of Cortisone. He and John Nicholson worked for years before they found Ibuprofen at the start of the 1960s. In 1966 the active component went into clinical studies and in 1969 it was allowed in the UK as a prescription drug. During the 1970s its popularity grew and in 1983 it was allowed in the UK as over-the-counter drug. In 1987 he was awarded an OBE because Ibuprofen was this successful and popular worldwide. In 2008 Adams received an Honorary Science degree of University Nottingham. In 2016 the students of Nottingham University elected him "Best Alumni" of the University.

Is Stewart your relative? Please don't go away!

ask our community of genealogists a question.
Sponsored Search by Ancestry.com
DNA
No known carriers of Stewart's DNA have taken a DNA test. 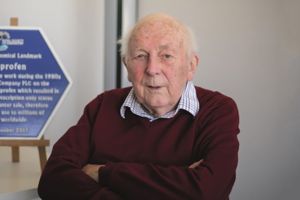 Stewart is 42 degrees from Danielle Liard, 38 degrees from Jack London and 37 degrees from Henry VIII of England on our single family tree. Login to find your connection.