Banat Schwaben is a sub project of the Germany Project

The Banat Swabians[1]are part of the Danube Swabiansan a ethnic German population in Southeast Europe. In the 18th century they emigrated to what was then known as the Austrian Empire's Banat of Temeswar province, which was later included in the Habsburg Kingdom of Hungary.

The goal of this project is to widen the knowledge of this particular area. 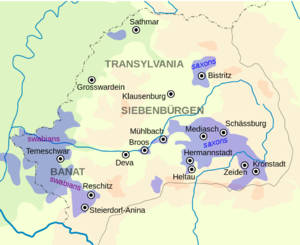 Lori (Beckett) Zukerman
Eva, I was wondering if you'd allow me to do a page for my grandparents' village. I don't claim to know everything or even a lot about it but I'd like to take it on and I can learn about it as I work on the page. I'm already involved in the Donauschwaben Project and would like to get more active and involved.
posted Jun 29, 2019 by Lori (Beckett) Zukerman