Ellen was born about 1860. She is the daughter of Edward Wright and Harriet Buer.

Ellen, named after Mother 's youngest sister. She was a delicate, frail child, who needed mother 's watchful care. This most delicate child of all lived to be 85. When their mother gave up the Bazaar business, she took it over with sister Jane (Jenny).
From the Greig family archive "As I understand it, he was serving in the West Indies (? Barbados) when his first wife died leaving him with 2 little children, a boy and a girl. It appears he had some function in his commanding officers household. This General was also the Governor General of the Island where they were stationed. The General’s Lady, who was with the Brethren, had a lady’s companion who was Ellen Wright. This was the way they met. "
Nellie married Thomas HENRY, a 40-year-old Scot and a widower with 2 young children, at St Pancras Register Office on 19th Sept 1878. Thomas was soldier born about 1837 in Kirkmchael, Dumfries, the son and grandson of Innkeepers. He served in the Royal Artillery from 1851 to 1891, including a spell abroad in Barbados. By 1881 Thomas and Nellie were on Cumbrae Island, Bute (he was a Drill Sergeant).
Nellie gave him 4 more children: Jeanie M, born 1880, died 1888 aged 8 yrs 8 months of diphtheria; George B, b. about 1882 (went to Canada, m. Beatrix, an American but divorced when their daughter Bea was young); Harriott B (b. 1884, married John Greig their 3rd child, Henry Buer Wright Greig (b. 1921 and a Doctor) kept the family names alive. This was the only part of the family to stay in Britain. Ellen C M, (Nellie) born about 1888 (went to Canada with her mother in 1928 and after her mother died married Jack McGlaishan, an elderly bachelor farmer); and Alexander b. 1890 (married Fanny Martha in 1913 in Islington, emigrated to Canada).
In 1891 Nellie and the children were still in Millport, Cumbrae, but Thomas, who had just left the RA as a Pensioner, was a Caretaker living in lodgings in Glasgow. By 1901 they were both in Cambuslang, Glasgow — she worked in a Draper's shop, he was a school caretaker. Thomas died in 1927 and Nellie went to Canada with her daughter Nellie in 1928 at the age of 81, sailing from Glasgow to Montreal on the ship Melita on 18 May. She lived to the age of 85.

Their first child was a daughter, Jeanie Mary Henry, born in Millport on 2nd April, 1880. She was probably named after Thomas’s maternal grandmother, Jean Lawson (nee Borthwick), and his mother, Mary Lawson. Jeanie Mary survived only until she was eight years old: she died of diphtheria on 23rd December 1888. Ellen wrote a heartfelt account, unbearably sad to read, of the last hours of Jeanie’s life.
The second child born to Thomas and Ellen was a son, George Broomhead Henry, born on 6th March, 1882 in Crichton Street, Millport. He was named after the husband of Ellen’s older sister, Ann, whose youngest daughter (born 1869) had been named Ellen, but known as Nellie; Nellie Broomhead married Arthur Skeffington around 1900, and three generations of the Henry, Broomhead and Skeffington families remained close friends.
Thomas and Ellen’s third child was a daughter, Harriott Buer Henry; later the spelling was changed to “Harriet”. Harriet was born on 10th January, 1884 in Helendale Cottage, Millport, and she was named Harriott Buer after her grandmother (Ellen’s mother). Although she was 17 years of age at the time of the 1901 census, no occupation is there recorded for her; however, she trained as a milliner before she was married. In 1910, she married John Greig in Cambuslang; at the time of the 1911 census, they were living in Ardoch Gardens, Cambuslang. They then moved to a top flat at 53 Randolph Road, Broomhill, Glasgow, where their first son, Robert, was born on 31st March, 1914. A second son, John, was born in 1916. In the same year, the family moved to a newly built house at 14, Borden Road, Jordanhill. In 1921, a third son was born: Henry Buer Wright Greig (known as Harry).
Harriet’s husband, John Greig, died in 1949. In 1957, Harriet moved to Ayr, and lived beside her son Robert and his family. She died as a result of a stroke in 1968. She was 84 years old.
The fourth child of Thomas and Ellen was another daughter; she was born in Helendale Cottage, Millport on 2nd May 1887, and was named Ellen Catherine Marshall Henry (always known as Nellie); it is said that “Catherine Marshall” was the name of her nurse; there is indeed a Catherine Marshall recorded in the Millport census of 1881. Nellie was the baby referred to in Ellen’s account of Jeanie’s last illness.
The fifth and youngest child of Thomas and Ellen was Alexander Henry, named after Thomas’s father; he was born in Denmark Cottage, Millport on 2nd September, 1889.
Thomas and Ellen, their four surviving children, and Thomas’s two children (Fanny and William) from his earlier marriage to Mary Anne Dixon, all lived in Millport until Thomas retired from the army on 17th February 1891; in April 1891, the census records that Thomas Henry (army pensioner – caretaker, aged 52) was a lodger at 49 London Road, Bridgeton, Glasgow, while Ellen (44) was still living in Millport (Eastwood House, Marine Park) with six children: Fanny (17), William (16, baker apprentice), George (9), Harriot (7), Ellen (3) and Alexander (1). When, soon afterwards, Thomas found permanent work as a school janitor, the family settled in Cambuslang.
The 1901 census records Thomas and Ellen and their four children living in Lawrence Place, Somervell Road, Cambuslang; Thomas (62) is a school janitor, Ellen (51) runs a draper’s shop, and George (19) is a draper assistant. Fanny and William had both left home before 1901; there is very little information available about them. Fanny later lived for some time in Broomhill, Glasgow, and kept in touch with her step-sister Harriet who lived in the same neighbourhood from approximately 1912 until 1957. The 1911 census records that William Henry, aged 35 and single, was a private in a ship’s company in His Majesty’s Royal Naval Training Establishment at Shotley, near Ipswich in Suffolk.
Harriet (1884-1968) was the only one of the family of Thomas and Ellen who remained in Scotland. George (1882-1976), Nellie (1887-1975) and Alex (18891985) all emigrated to Winnipeg, Canada.
Information is available from Valuation Rolls about the addresses of the Henry family homes and the draper’s shop in Cambuslang between 1895 and 1925. In 1895, Ellen had a draper’s shop Main Street; she ran the shop with the assistance of her family for at least 20 years. Sometime before 1915, the Henry home at 28 Croft Road was purchased; they remained there for over 20 years. Ellen also owned 12 Milton Avenue, Cambuslang, which presumably was rented to tenants.
On 25th November, 1926, Thomas Henry died at home, 28 Croft Road, Cambuslang. He was 89 years old.
Eighteen months after Thomas’s death, his widow Ellen, accompanied by her daughter Nellie, went to join George and Alex in Winnipeg.
Records of passenger lists show that on 18th May 1928, Ellen Henry (Housewife, aged 81) and Ellen C.M. Henry (Housekeeper, aged 40) sailed from Glasgow to Montreal in the ship named Melita. In October 1928, Ellen sailed back to Greenock from Canada, presumably to settle her affairs, before finally returning to Canada on the Melita in August 1929.
Ellen lived for another five years after Thomas’s death. She died in Winnipeg on 18th July,1931, aged 84.

ask our community of genealogists a question.
Sponsored Search by Ancestry.com
DNA
No known carriers of Nellie's DNA have taken a DNA test. 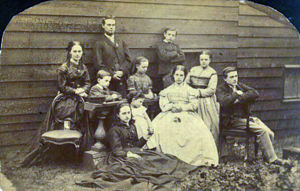 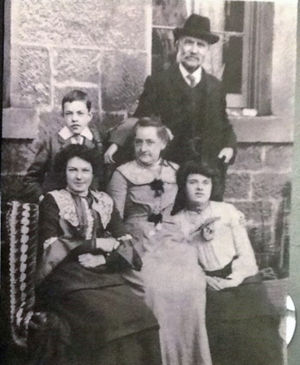 Leave a message for others who see this profile.
There are no comments yet.
Login to post a comment.
Simon Daniell
Wright-32068 and Wright-17196 appear to represent the same person because: Obviously the same person
posted Dec 13, 2019 by Simon Daniell

Nellie is 26 degrees from Peter Roberts, 18 degrees from Emma Smith and 22 degrees from Henry VIII of England on our single family tree. Login to find your connection.