LeBaron was born in La Verkin, Utah, the eighth of 13 children. Joel was baptized into the LDS Church in 1931 in Colonia Juárez,Chihuahua, Mexico, where. the LeBarons had moved when Joel was an infant. Soon after Joel was born on 9 Jul 1923, his parents Dayer LeBaron and Maud McDonald, were excommunicated from the Latter Day Saints Church, which was foundational to their family history.

In 1955, Joel LeBaron and two of his brothers established the Church of the Firstborn of the Fulness of Times in Salt Lake City, Utah with Joel as President of the Church. Upon returning to northern Mexico, their parents and most of the members of the LeBaron family joined the new church. In 1967, Joel's brother Ervil LeBaron was removed from leadership in the church when he began to preach that he, and not Joel, was the proper leader of the church.

In 1972, Ervil LeBaron established the rival Church of the Lamb of God and began teaching his followers that in accordance with the doctrine of blood atonement, Joel had to be executed for his sins. On 20 August 1972, in Ensenada, Baja California, Mexico, one of Ervil's followers Daniel Jordan (who was married to one of their nieces) shot Joel LeBaron in the head while Joel's young son was asleep in a car in the driveway. [1]Ervil was tried and convicted in Mexico for Joel's murder, but the conviction was overturned. Ervil LeBaron was eventually convicted in Utah for ordering the killing of rival Mormon fundamentalist leader Rulon C. Allred. Joel LeBaron was succeeded as president of the church by his brother Verlan.

Is Joel your relative? Please don't go away!

ask our community of genealogists a question.
Sponsored Search by Ancestry.com
DNA Connections
It may be possible to confirm family relationships with Joel by comparing test results with other carriers of his ancestors' Y-chromosome or mitochondrial DNA. However, there are no known yDNA or mtDNA test-takers in his direct paternal or maternal line. It is likely that these autosomal DNA test-takers will share some percentage of DNA with Joel: 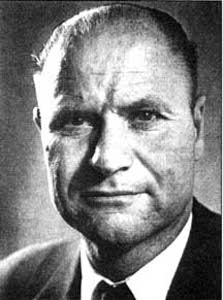