[send private message]
This page has been accessed 588 times.

Please contact the Name Study Coordinator Maggie N. or post a comment at the foot of the page. If you have any questions, just ask. Thanks!

The goal of this Delahunty Name Study to collect together in one place everything about the Delahunty surname and the variants of that name. The hope is that other researchers like you will join our study to help make it a valuable reference point for people studying lines that cross or intersect.

How the Delahunty Name Study began

Strangely enough, it has begun because of my 3rd Great-Grandmother, Mary Delahunty. She is my brick wall and although this Name Study has begun as a personal quest for information, it will cast a wider net to embrace the origins of the Delahunty surname as well as the migration and distribution patterns of it.

Origins of the Delahunty surname

I decided to take on the project as it was not registered yet at the One Name Guild. I did an inquiry at the Surname Maps for the Delahunty Surname in Ireland in the 1901 Irish census.

Many surname studies say that Delahunt and Delahunty are one and the same and that it's origins is Irish. Therefore, I begin my collection data in Ireland.

The Surnames of Ireland 6th Edi., By Edward MacLysaght.

Previous Studies of the Delahunty Surname

All the varients are listed here at Forebears Delahunty.

Today (2018), it is most prevalent in Australia; secondly, in Ireland.

Other varients captured in Ireland and England were Delahunt and Delahanty.

*DELAHANTY is another variant.

Initially concentrating on indexed sources such as vital records, including religious.

Assembled biographies, pedigrees and histories: Copies may have been deposited at the Society of Genealogists, at a family history society, a local Record Office, or a local studies library. 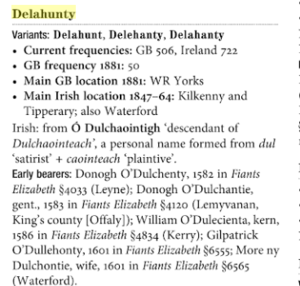