William Bentley (born in 1589, England, died after 1663. married Elizabeth (no date or place) arrived at the Jamestown Colony in January 1608.

The Bentley family arrived and began living in America in 1608, twelve years prior to the pilgrims landing at Plymouth rock in 1620. William Shakespeare was still writing his great works. The first Bentley could not have brought a copy of the King James Bible with him across the Atlantic in 1608 because the first translation of this bible wasn't completed until 1611.

“The Generall Historie of Virginia, New-England, and the Summer Isles” is a book written by Captain John Smith, first published in 1624. “The book is one of the earliest, if not the earliest, histories of the territory administered by the Virginia Company. “[2]

Captain Smith’s book places William Bentley in Jamestown, arriving in 1608 on the John and Francis as a Gentleman.[3]. Smith also records William Bentley was present as a soldier with him on his journey to see Pamaunke in Werawocomoco on 29 of December and still on the journey as of Jan. 13, 1609, along with others including four Dutchmen [4].

“. . .All this time to reclaime the Dutchmen, and one Bentley another fugitive, we imploied one William Volda (a Switzer by birth) with pardons and promises to regaine them” [5]

Smith's reference to Bentley as a fugitive appears to be the last reference to William Bentley in Virginia until he is mentioned again in 1624. It is possible that after being labeled a fugitive William was returned to England.

There is at least one account of “unruly youths” being rejected by the Colony and being sent back to England. “The Diamond, Falcon, Blessing, Unitie, and Lion, sailed from Virginia about October 14, 1609, taking Captain John Smith, . . .and about thirty of those unruly youths sent to England in the fleet, as they were not wanted in Virginia” [6].

While there does not appear any direct evidence that William Bentley was sent back to England, the narrative of Captain Smith suggests it was a possibility. At least one source lists two people named William Bentley, the first William as a "fugitive who (like the runaway Dutchman) fled to the Indians." This source then describes the William Bentley arriving on the Jacob as a separate person.[7]

Return to Jamestown or a different William arrives.

The records of the Virginia Land Office Patents and Grants show William Bentley receiving a grant of 50 acres on December 1, 1624 in Keccoughton, in the corporation of Elizabeth City, Virginia,[8]

An 1874 book, Hootten's Emigrants (MUSTERS OF THE INHABITANTS IN VIRGINIA - Elzabeth Cittie p.251) shows in the incorporation of James city a patent of 50 acres to William Bentley below blunt point, between Leift Chiles Alington and Thomas Godby (p. 273) [Original list]

SOUTHERN HISTORICAL FAMILES by Boddie, Vol. XVI, Appendix V pp. 167-168 On December 1, 1624, William Bentley was granted 50 acres in the Corporation of Elizabeth City. "being a new planter who came to this country at his own charge in the JACOB in 1624", and on the same date Thomas Godby, yeoman and ancient planter, was granted 100 acres adjoining (NUGENT, Cavaliers & Pioneers, p.5). The muster list for the Jacob lists a William Bentlie.

On December 19, 1625 William Bentley was called to testify in a case between Mr. Allington and Mr. Flinton (source Minutes of the Council and General Court of Colonial Virginia [9]

In March 1628, Bentley was found guilty of manslaughter for the death of Thomas Godby occurring on February 8, 1628 while at the house of William Parker. He demanded that “he ought not to die and claimed the Benefit of Clergy and his life was spared.” [10][11]

In England, when a prisoner claimed benefit of clergy he was asked to read from the bible, the text usually selected by the Court for him to read was the first verse of the 51st Psalm beginning "Miserere mei deus", "Lord have pity on me". This was commonly called his "neck Verse".

Life after Trial, including being in the House of Burgess

On October 16, 1629, William Bentley was present at the meeting of the House of Burgess in Virginia, representing the Nuttmegg Quarter. He served the Nuttmegg Quarter with Whuam Cole. [Source: Hening I, 137-139.] and [(The original MS came from Thomas Jefferson)]

Some of the Acts passed during this session of the House of Burgess included things like authorization for expeditions against the Indians, fines for not attending church and ensuring “the Saboth day be not ordinarily profaned by workeing in any imployments or by iournyeing from place to place”

There does not appear to be specific information about when William died. However, it does appear William abandoned the land he received in 1624 sometime before September 24, 1645. In a land grant on that day, Mr. Edward Major was granted 300 acres. The land granted to him is described as the land formerly granted to Severall pers: Pharoah Flinton, 150 acs., Giles Allington, 100 acs., & William Bentley, 50 acs. (individually) & by them deserted.[12]

There was also a mention in January 9, 1662/3 of William's land as though he were still living", [13] however this could be a reference to his first son also named William.

Images: 1
Deed to William Bentley for land at Jamestown 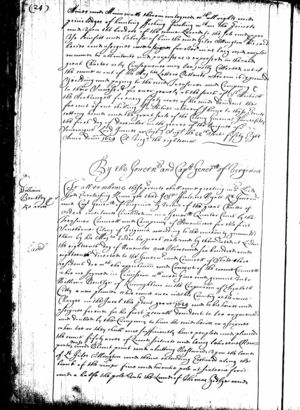 John Bentley
I have seen them listed as his parents before but haven't seen any sources to support the idea. Thanks for leaving the note. Hopefully someday we can find some supporting data.
posted May 06, 2020 by John Bentley

John Bentley
Bently-16 and Bentley-2142 appear to represent the same person because: It seems most agree we should go with the Bentley spelling. The link to the discussion is http://www.wikitree.com/g2g/210191/merging-profiles-with-different-last-names-at-birth?show=210994#c210994
posted Jan 18, 2016 by John Bentley

John Bentley
Bently-16 and Bentley-2142 are not ready to be merged because: Before merging we need to decide which spelling was used by Williamm at the time. I posted to the G2G forum about this . That discussion is here http://www.wikitree.com/g2g/210191/merging-profiles-with-different-last-names-at-birth

In that post I included the sources I have for the Bentley spelling. We probably also need to decide on the other conflicting info like date of death.

John Bentley
I did a post in the G2G feed for Bentley and Bently. In this feed I provide the sources I have that support the Bentley spelling. If you would like to follow the feed it is available here

John Bentley
It appears this line of Bentlys is duplicate of the line of Bentleys that begin with [William Bentley]. Should we look into merging them?
posted Jan 15, 2016 by John Bentley

William is 26 degrees from Ludwig Kraayenbrink, 13 degrees from Henry VIII of England and 27 degrees from Ferdinand von Zeppelin on our single family tree. Login to find your connection.