Hedy Lamarr, born Hedwig Eva Maria Kiesler, was an Austrian-born American actress and inventor. She was born in 1914. Her father was a successful banker and her mother was a concert pianist from a well-to-do family. In the late 1920's she began training as an actress and changed her name to Hedy Lamarr. in 1933 she married one of the top five wealthiest men in Austria, Fritz Mandl, a munitions tycoon 14 years her senior. They lived on their massive estate, Schloss Schwarzenau. By 1937, her marriage had become too much for her to bear. Disguised as her maid she fled Mandl seeking refuge in Paris. Here she met film mogul Louis B Mayer and she was off to Hollywood where she embarked on a fresh life. Between 1940 and 1949 she completed 18 films bringing her enormous fame,

In 1941, she paired up with Hollywood composer and fellow inventor George Anthiel to create frequency hopping technology virtually impervious to interference. It was intended to overcome the threat of jamming Allied guided torpedoes by the Axis powers. On 11 Aug 1942 the U S Government awarded them patent number 2,292,3 57 for a "Secret Communications System". The Navy never implemented their invention during World War I, yet their concept was in use on American warships by 1962, just in time for the Cuban missile crisis. This technology is now widely integrated into many of the devices that we use today. It is the basis for all our wireless technology.[1]

Is Hedy your ancestor? Please don't go away!

ask our community of genealogists a question.
Sponsored Search by Ancestry.com
DNA
No known carriers of Hedy's DNA have taken a DNA test. 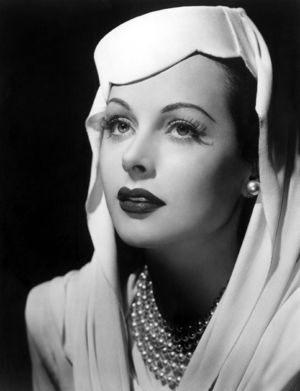 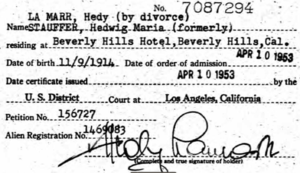 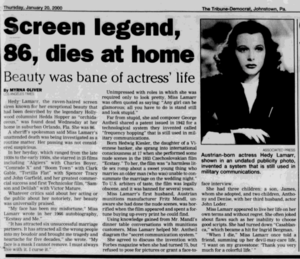 DK Clews
Kiesler-4 and Kiesler-7 appear to represent the same person because: These are both of actress and inventor Hedy Lamarr.
posted Jun 15, 2016 by DK Clews

Hedy is 23 degrees from Donald Howard, 17 degrees from Julia Howe and 16 degrees from Henry VIII of England on our single family tree. Login to find your connection.