Peyton Randolph was born on September 10th 1723 in Williamsburg, Virginia. His parents were Sir John Randolph and Susannah Beverley". Peyton was grandson to William Randolph.

Peyton Randolph studied at the College of William and Mary in Williamsburg and studied law at the Inner Temple in London. Following in his father's footsteps, he was admitted to the Virginia bar on February 10th 1745.

He became an early patriot who pushed for independence from Britain. His contributions to the movement for American independence and democracy were significant and long-lasting.

Peyton Randolph was the first President of the Continental Congress in 1774. [1]

He served several terms in the VA House of Burgesses and also as the attorney general- at the same time. [2]

He had no children.

Peyton Randolph died in Philadelphia, and was buried at Christ Church. He was later re-interred at the College of William and Mary chapel. [3]

Two ships were named for Peyton Randolph, president of the First Continental Congress. The Continental Congress named one of their first frigates the Randolph. [6] The second, the USS Randolph was one of 24 Essex-class aircraft carriers built during World War II for the US Navy. [7]

A transcription of the Last Will and Testament of Peyton Randolph can be found on the Colonial Williamsburg web site Meet the Randolphs "Meet the People : The Randolphs : Betty Randolph" [8]

Sponsored Search by Ancestry.com
DNA Connections
It may be possible to confirm family relationships with Peyton by comparing test results with other carriers of his ancestors' Y-chromosome or mitochondrial DNA. However, there are no known yDNA or mtDNA test-takers in his direct paternal or maternal line. It is likely that these autosomal DNA test-takers will share some percentage of DNA with Peyton: 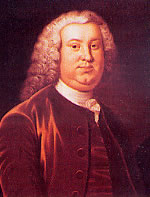