James B [uncertain] Cassidy
Born about 1812 in Enniskillen, Fermanagh, Ireland

James Cassidy was born in Ireland.

James B CASSIDY.[1][2] James is believed to have been born in abt 1812 in Enniskillen, Fermanagh. No evidence can be found via any BDM certificates of their parents names but later descendants have the name Britton so connection is highly likely.

The family bible does suggest parents are Stephen CASSIDY and Kitty BRITTON, both from Enniskillen, which seems to firm up the connection. The bible also indicates that James and Margaret were married in Enniskillen (Fermanagh, Ireland). He is believed to be a brother of Thomas, Phillip and Edward, this has now been confirmed through DNA research.

The first reliable record for James and his wife Margaret is the 1840 US census, where they are living in Red River County, Texas.

A number of researchers claim that the 1830 census for Guilderland, Albany, New York is the family. This record shows a James Cassidy living with what are claimed to be his parents (one male between 20-30, one male between 60-70, and a female between 50-60). My difficultly with this record is that if this is the same family, then his father Stephen Cassidy was convicted in March 1830 and later sentenced to prison for a period of two years, it was reported that he gained this reprieve and was not to be transported on 6 April 1830. I find it hard to believe that he could have emigrated with his wife in time to be with James by census night of 1st June 1830. Also where is James' wife and family? Records suggest Catherine was born in 1828 in New York, so for the record to be more likely you would expect to find them residing together.

No death record can be found for James CASSIDY, the last record is in 1844.

In 1900 his wife is boarding with her daughter Catherine, who states her mother was born in New York and her father in New Jersey.

James B. Cassidy (although often spelled as Cassady by the Republic of Texas clerks).
He had probably moved to Texas by 1838 and that he had died by 1844 (those family records were probably right). He is listed in the 1840 Census of the Republic of Texas and on the tax rolls (Edited by White, Gifford E., "1840 Citizens of Texas" vol 2, 1983-1988, p. 140). In order to attract settlers, the Republic of Texas' Congress passed a law granting large grants to people who had lived within its borders prior to an 1830s date. These were unconditional "first class" patents or land grants. James got a "second class" patent reflective of his service in the Republic of Texas army in 1842 and that he had settled in Bastrop County in the late 1830s.
Such settlers were given conditional certificates if they came to Texas"after 1 Oct 1837 but before 1840" and were given "constitutional certificates for 1280 and 640 acres respectively. ... "The principle conditions were that the settler was to occupy the land and remain a responsible citizen for three years." (White, Gilford E., "First Settlers of Bastrop and Travis Counties, Texas: from the Originals in the General Land Office," Distributed by Ingmire Publications, 1984). I found pdfs from the Texas Land Office on-line site of their sworn statements and the certificates around the land. The abstract of the land grant or patent is attached to James' record on my Ancestry.com tree, and the abstract of the sale is found on Margaret Cassidy's record.
The Cassidys were given their conditional certificate on 17 Aug 1838 (Class 2, 640 Acres). The unconditional certificate (after proof they had lived on the land for more than three years) was not given to Margaret Cassidy (as the administrator of James' estate) was 2 Nov 1854. (White, "First Settlers of Bastrop..., p.29) In one of the statements, Margaret attests that she could not find the original 1838 grant. That loss and James' death may have delayed their finally getting their grant from the now State of Texas (as part of the USA). As I've said in an earlier email, they sold the farm in 1855 and next show up in Austin, about 40 miles away, where Catherine Cassidy Horan lives.
In some of the Republic of Texas claims, Margaret Cassidy and Catherine Horan attest that William Jackson, their cousin who is from Ireland, was who he said he was. I have no idea about this fellow but am on the lookout for further clarification.
Our Cassidys and John Horan got here early for the Irish (it looks like they are they both the first of their surnames to come to Texas). There is a lot of documentation of potato famine Irish from 1841 one. But I am thinking that Cassidy's must have gotten here by the 1820s -- Catherine Agnes Cassidy was born in New York in 1828 or so.
Previous family trees have listed his death at abt 1844 near Houston. Republic of Texas records indicate that he served in the Republic of Texas Army in 1842. Texas General Land Office records indicate that he received a conditional land grant in 1838 for land in Bastrop Couny, and after he died, his widow Margaret received the unconditional certificate in 1854. She sold the farm in 1855 and is listed as living in Austin, Texas in the 1860 US Census along with her children. Her married daughter Catherine Cassidy Horan lives in Austin from 1850 on.

Could James actually be the missing 'brother Edward' ??? Birth is about right but Edward escaped in 1833 - US contacts believe James' daughter Catherine was born in New York in 1828. Could Margaret have been pregnant before the trial?? They were transported in 1830, but the actual crime took place in September 1829. Perhaps she went to America alone or with her parents?? The marriage record on IGI suggests it was in NY in 1827 or 1832 if the 1827 version is accurate, this theory may be wrong. The bible suggests they were married in Enniskillen. Could Margaret be the sweetheart Edward reputedly went back for? It is interesting to note that his other children are born from 1833 onwards, after the date Edward is reported to have escaped. Given the IGI records supposedly came from the records contained in the family bible all the dates can be regarded with some suspicion as they were clearly estimates.

ask our community of genealogists a question.
Sponsored Search by Ancestry.com
DNA Connections
It may be possible to confirm family relationships with James by comparing test results with other carriers of his Y-chromosome or his mother's mitochondrial DNA. Y-chromosome DNA test-takers in his direct paternal line on WikiTree: It is likely that these autosomal DNA test-takers will share DNA with James: 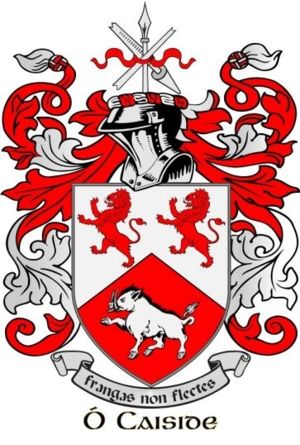 James is 18 degrees from Ludwig Kraayenbrink, 20 degrees from Henry VIII of England and 28 degrees from Ferdinand von Zeppelin on our single family tree. Login to find your connection.