Russell was born on June 21, 1921, in Bemidji, Minnesota. She was the eldest child and only daughter of the five children of Geraldine (née Jacobi) and Roy William Russell. Her brothers are Thomas, Kenneth, Jamie, and Wallace.

Her father had been a first lieutenant in the U.S. Army, and her mother an actress with a road troupe; her mother was also the subject of a portrait by Mary Bradish Titcomb, Portrait of Geraldine J., which achieved some notoriety when purchased by Woodrow Wilson. Russell's parents lived in Edmonton, Canada until shortly before her birth and returned to that city nine days after her birth, where they lived for the first one or two years of her life. The family then moved to Southern California where her father worked as an office manager.

Russell's mother arranged for her to take piano lessons. In addition to music, she was interested in drama and participated in stage productions at Van Nuys High School. Her early ambition was to be a designer of some kind, until the death of her father in his mid-40s, when she decided to work as a receptionist after graduation. She also modeled for photographers, and, at the urging of her mother, studied drama and acting with Max Reinhardt's Theatrical Workshop and with acting coach Maria Ouspenskaya.

In 1940, Russell was signed to a seven-year contract by film mogul Howard Hughes, and made her motion-picture debut in The Outlaw (1943), a story about Billy the Kid.

She performed in an assortment of movie roles. She played Calamity Jane opposite Bob Hope in The Paleface (1948) on loan out to Paramount, and Mike "the Torch" Delroy opposite Hope in another western comedy, Son of Paleface (1952), again at Paramount. Russell played Dorothy Shaw in the hit film Gentlemen Prefer Blondes (1953) opposite Marilyn Monroe for 20th Century Fox.

She appeared in two movies opposite Robert Mitchum: His Kind of Woman (1951) and Macao (1952). Other co-stars included Frank Sinatra and Groucho Marx in the comedy Double Dynamite (1951); Victor Mature, Vincent Price and Hoagy Carmichael in The Las Vegas Story (1952); Jeff Chandler in Foxfire (1955); and Clark Gable and Robert Ryan in The Tall Men (1955).

In Howard Hughes's RKO production The French Line (1954), the movie's penultimate moment showed Russell in a form-fitting one-piece bathing suit with strategic cutouts, performing a then-provocative musical number titled "Lookin' for Trouble". In her autobiography, Russell said that the revealing outfit was an alternative to Hughes' original suggestion of a bikini, a very racy choice for a movie costume in 1954. Russell said that she initially wore the bikini in front of her "horrified" movie crew while "feeling very naked."

In 1955, Russell and her first husband, former Los Angeles Rams quarterback Bob Waterfield, formed Russ-Field Productions. They produced Gentlemen Marry Brunettes (1955) in which she starred alongside Jeanne Crain, The King and Four Queens (1956) starring Clark Gable and Eleanor Parker, Run for the Sun (1956) starring Richard Widmark and The Fuzzy Pink Nightgown (1957), which was a box-office failure. She also starred in The Revolt of Mamie Stover (1956).

At age 18, she became pregnant while dating her high-school sweetheart, Bob Waterfield, who would become her first husband. Russell went to a backstreet "abortionist". "I had a botched abortion, and it was terrible. Afterwards, my own doctor said: 'What butcher did this to you?' I had to be taken to the hospital. I was so ill I nearly died." The abortion left her infertile, and for the remainder of her life, she believed that abortion was wrong under any circumstances, even rape or incest. She described herself as "vigorously pro-life".

Two months after her divorce from Waterfield, Russell married actor Roger Barrett; the marriage ended when he died of a heart attack only two months later in November, 1968.

In February 1952, Russell and Waterfield adopted a baby girl, who they named Tracy. In December 1952, they adopted a 15-month-old boy, Thomas, whose birth mother, Hannah McDermott, had moved to London to escape poverty in Northern Ireland, and, in 1956, they adopted a nine-month-old boy, Robert John. In 1955, she founded Waif, an organization to place children with adoptive families, and which pioneered adoptions from foreign countries by Americans. At the height of her career, Russell started the "Hollywood Christian Group", a weekly Bible study at her home which was attended by many of the leading names in the film industry.

She married real-estate broker John Calvin Peoples on January 31, 1974, living with him until his death from heart failure April 9, 1999. Russell and Peoples lived in Sedona, Arizona, for a few years, but spent the majority of their married life residing in Montecito, California.

In the 2013 film Philomena, Russell's photograph appears on a wall; a character states that Russell bought a child for £1000 from the tainted Sean Ross Abbey in Ireland featured in this true-life movie, but this claim is countered in at least one recent British report, which states that in the mid-1950s, Russell and her husband "rather informally adopted a son from a woman living in London, but originating in Derry, Northern Ireland. There was a major scandal and a court case, after which Russell was allowed to formalise the adoption."

In 1953, she tried to convert Marilyn Monroe during the filming of Gentlemen Prefer Blondes; Monroe later said, "Jane tried to convert me (to religion), and I tried to introduce her to Freud". Russell appeared occasionally on the Praise The Lord program on the Trinity Broadcasting Network, a Christian television channel based in Costa Mesa, California.

Russell was a prominent supporter of the Republican Party, and attended Dwight Eisenhower's inauguration, along with such other notables from Hollywood as Lou Costello, Dick Powell, June Allyson, Hugh O'Brian, Anita Louise, and Louella Parsons. She was a recovering alcoholic who had gone into rehab at the age of 79, and described herself in a 2003 interview as, "These days, I am a teetotal, mean-spirited, right-wing, narrow-minded, conservative Christian bigot, but not a racist."

Russell resided in the Santa Maria Valley along the Central Coast of California. She died at her home in Santa Maria. of a respiratory-related illness on February 28, 2011. She is survived by three children: Thomas Waterfield, Tracy Foundas, and Robert Waterfield. Her funeral was held on March 12, 2011, at Pacific Christian Church, Santa Maria.

Is Jane Russell your relative? Please don't go away!

ask our community of genealogists a question.
Sponsored Search by Ancestry.com
DNA
No known carriers of Jane Russell's DNA have taken a DNA test. 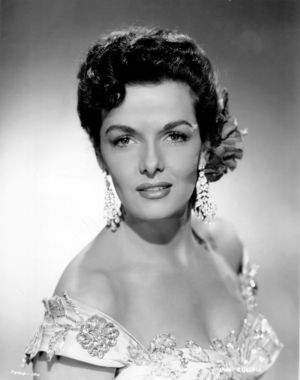 Jane Russell is 30 degrees from Jaki Erdoes, 25 degrees from Wallis Windsor and 26 degrees from Henry VIII of England on our single family tree. Login to find your connection.