John Howland, the 1620 Mayflower passenger, was the son of Henry Howland of Fenstanton, England, and Margaret _____. His birth was about 1592, based on the fact that he was above 80 years, when he died at Plymouth 23 Feb 1672/3.[1][2] John's brothers, Arthur and Henry, also migrated to Plymouth, where their Quaker leanings were at odds with the established government and religion.[3]

Sept 1620, John Howland sailed on the Mayflower as one of two "man-servants" of Gov. Carver.[4]

John almost lost his life by being swept overboard. "In sundry of these storms the winds were so feirce, & ye seas so high, as they could not beare a knote of saile, but were forced to hull for divece days togither. And in one of them, as they thus lay at hull in a mighty storme, a lusty young man (called John Howland) coming upon some occasion above ye grattings, was, with a seele of tye shipe, thrown into ye sea; but it pleased God yt he caught hould of ye tope-sail halliards which hunge over board, & rane out at length; yet he held his hould (though he was sundrie fadoms under water) till he was hald up by ye same rope to ye brim of ye water, and then with boat hooke & other means got into the ship againe & his life saved and though he was something ill with it, yet he lived many years after, and became a profitable member both in church and comone wealthe."[5]

1621 Winter: Death of about half the passengers on the Mayflower, including Gov. Carver and the entire Tilley family except Eilzabeth. John Howland was "man-servant" to Govenor Carver and was part of his household family. The Governor and his wife were among the fifty Pilgrims who died during the first year at Plymouth. It is believed that John Howland inherited John Carver's estate as the Carvers had no children of their own.[7]

1626, 1627: The expedition to Plymouth was funded by about 70 men, known as "Adventurers." After several years, for various reasons, it was decided to purchase the shares in the colony from these Adventurers. John Howland became one of the group (eight men from Plymouth and four in England) known as "undertakers" who purchased the shares for £1800.[9]

1627: The Plymouth cattle division of 1627 listed John as the head of the fourth lot. His wife, Elizabeth, and children John Jr and Desire were also listed. Their share was one of the 4 heifers that came in the Jacob.[8]

1634 April: The Plymouth colonists began trading with the natives of the Kennebec area about 1626. In 1629, they secured legal rights to this trade known as the Kennebec or Plymouth Patent. In April of 1634, when John Howland was in charge of the trading, John Hocking challenged those exclusive rights to trade. John Howland told Hocking to weigh anchor. Hocking replied with angry words, and Howland ordered three of his men to cut the anchor. Unfortunately, the current was strong, so they added a fourth man Moses Talbott. When they reached the ship, Talbott was shot and killed by Hocking, despite Howland's protests that Talbott was only doing as ordered, and that Hocking should shoot himself (Howland) instead. Before any more people could be shot by Hocking, he was shot and killed by somone on Hocking's boat.[12]

1656: In his years in Plymouth Colony John acquired many parcels of land for himself and to see that his children were well settled. Many of these can be found in the Plymouth Colony Records especially in Vol 12. There were sometimes disagreements.

1656 "A writing apointed to bee Recorded"

"Wheras there was a diference fell out betwixt John howland senir Thomas Bourne and John Dingley about the Range of a pcell of marsh meddow lying in Marshfeild and not eazye to be knowne;

"These are therefore to put an end to the aforsaid Diference; It is agreed by and between the said John Howland senir Thomas Bourne and John Dingley senir: that the line or Range shall begin att the beach next the sea upon a west line sett by a compas to a homacke in the marsh whre there lyes an old Ceader tree there being noe other nor no more trees neare next to the great Iland but that onely And from the aforsaid homacke and tree to Run upon the aforsaid west line to the Basse creeke To which agreement all the aforsaid pties have freely assented unto as abovesaid; alsoe that this agreement bee put upon Record both att Marshfeild and the court booke att Plymouth to avoid all further Diference for time to Come about the prmises; in witnesse wherof wee the said John howland senir: Thomas Bourne and John Dingley have put to our hands this fourth of May 1655" It was signed in the presence of Myles Standish by John howland, Thomas Bourne and John Dingley[21]

Death: February 23, 1672/3 at Plymouth, Plymouth Colony.[23] "The 23th of February, 1672, Mr. John Howland, Senir, of the towne of Plymouth, deceased. Hee was a godly man and an ancient professor in the wayes of Christ; hee lived untill hee attained above eighty yeares in the world. Hee was one of the first comers into this land, and proved a usefull instrument of good in his place, & was the last man that was left of those that came over in the shipp called the May flower, that lived in Plymouth; hee was with honor Intered att the towne of Plymouth on the 25 of February, 1672.[24] The current grave stone on Burial Hill was erected in 1897 with funds raised by Mrs. Joseph Howland. It replaced a stone erected about 1836 by John and Henry Howland of Providence, Rhode Island. The older stone was buried under the new one. It stated that Howland's wife was a daughter of Governor Carver. The 1856 discovery of Governor William Bradford's manuscript "Of Plimoth Plantation." proved this to be wrong. Instead he married Elizabeth, daughter of John and Joan Tilley.[25]

John had an extensive inventory, which not including land, and after debts and charges was appraised at £157 8s 8d. He had his dwelling house at Rocky Nook in Plymouth, land at Jones River, 1/2 a house and land at Colchester in Plymouth, land in Duxburrow, house and land in Middleberry, and shares of land called "Majors Purchase. His house was three rooms, a front and back room and an upstairs chamber. Besides his Bible, he had other books.[12]

All 11 unique SNPs have occurred before the birth of Henry Howland of Fenstanton, and they are genetically passed to all his sons and their male descendants; however, there are more unique private variants that occurred in the Y-DNA of their paternal line descendants after the births of Arthur, John, and Henry Howland individually.[28]

If another paternal line descendant of Pilgrim John Howland takes the Big Y-700 test and his results reveal a match to any of those private variants, it will create two new separate haplogroup subclades of R-A9703 in the future for Lt. John Howland, Jr's line and Jabez Howland's line.

The parentage of Arthur Howland, John Howland, and Henry Howland, Jr. has been confirmed by SNP testing by Anonymous Howland, Frank Howland, FGC kit #E8PEF, and Big Y-500 tester which shows that they share 11 unique SNPs and are therefore all-male descendants of Henry Howland Sr.

The more DNA testings can discover other SNPs unique to the descendants to trace the Y-DNA to one of three Howland brothers in America. Recruiting additional Howlands for further SNP testing - anyone interested in submitting their Y-DNA. See more information at Howland (Y-DNA) under the Mayflower DNA project and Howland DNA project under Family Tree DNA. 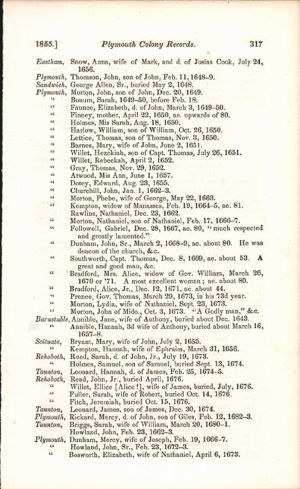 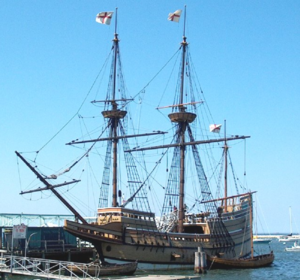 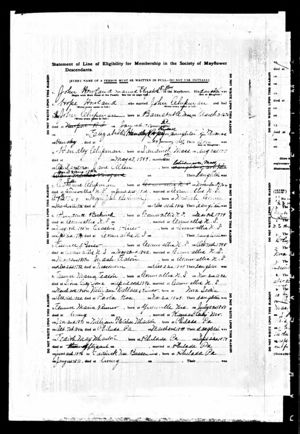 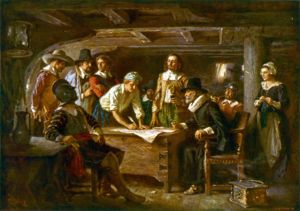 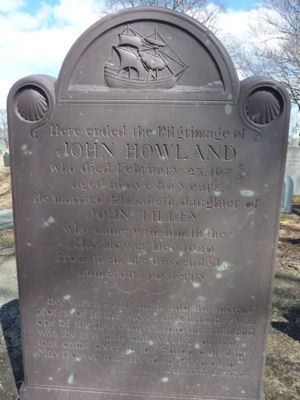 Anne B
I am going to move the Will and Inventory transcriptions (maybe some other stuff) to a Free space page if no one objects. Objections?
posted Mar 31, 2020 by Anne B
Carol (Jennings) Thoma
Sally Marr has made an interesting argument for 1599 as the approximate birth year. I am not going to quote for fear of copyright violation, but she argues that he must have been under 25 (born after 1595) to have come over on the Mayflower as an indentured servant. She also points out that ages at death are often overstated in old records. The complete article can be found here: https://spyhollywood.com/are-you-related-to-original-pilgrim-john-howland/
posted Jul 29, 2019 by Carol (Jennings) Thoma

Bobbie (Madison) Hall
Raymond, his place of birth is shown as "uncertain."
posted May 20, 2019 by Bobbie (Madison) Hall
Raymond Wing
The Howland family is not proven to be in Fen Stanton until the baptism of Simon Howland in 1604. (from the Bishop's Transcripts). Unfortunately both the parish register and the Bishop's Transcript for Fen Stanton are very fragmentary during this time period.

In any case, Henry Howland (father of John) is not believed to be a native of Fen Stanton and we simply don't know when he moved here. It is possible John Howland was not born/baptized at Fen Stanton.

This information comes from Caleb Johnson's article in the MAR 2016 "The Howland Quarterly" (pp. 10-20)

I'm doing a personal study of Mayflower ancestors John and Elizabeth (Tilly) Howland and her parents, and will add sources/text not under copyright as I find them.

April (Dellinger) Dauenhauer
Cousins, we have a problem on this profile for John Howland. Several pages of "John Howland of the Mayflower" Vol 1 by Elizabeth Pearson White have been copied verbatim under the section "Additional Information". I will be removing most of it, as it is a copyright issue of major proportions. She is a living author and the book has a c. date of 1990. My copy is the 7th printing, 2014. Very little of the text under 'Additional Information' will remain when I'm done. Much of it is elsewhere in the text box, from other sources, or is not directly related to Howland's life.

Just to let you know a major change will occur on this profile, and why. It is to protect WikiTree.

posted Apr 29, 2017 by April (Dellinger) Dauenhauer
Raymond Wing
Caleb Johnson wrote an article in the MAR 2016 "The Howland Quarterly" (pp. 10-20) documenting Henry Howland, father of John (and others) as well as his children.
posted May 25, 2016 by Raymond Wing