Samuel Allen I
Born about 1597 in England

A record of Samuel Allen's birth has not been discovered, nor have his parents been identified. The occasionally cited birthplace of "Bridgewater, Somerset, England"[1] is as yet unconfirmed. Samuel Allen was long thought to have been the son of George Allen, but it is now known that George's son was a much younger Samuel Allen.

Will of Samuel Allen[9]

16 September, 1669. Margaret Allen Executrix, and Joseph Allen the eldest sonn, Executor to the last will of Samuel Alien, deposed.

Sponsored Search by Ancestry.com
DNA
No known carriers of Samuel's DNA have taken a DNA test. 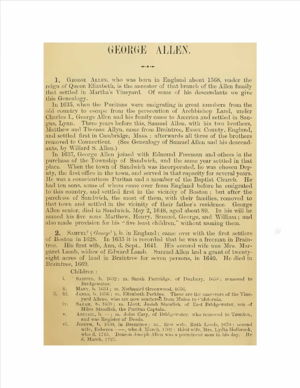 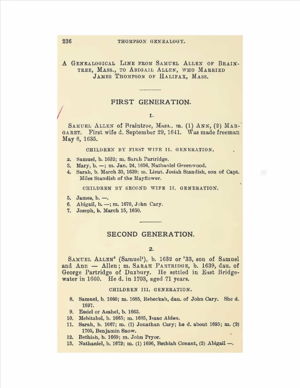 Leave a message for others who see this profile.
There are no comments yet.
Login to post a comment.
GeneJ X
Have proposed a merge of Wife Ann Whitmore (Whitmore-1910) into Ann Unknown (Unknown-438175).

Cathryn (Hallett) Hondros
Another reference to the Bridgewater, Somerset place of birth.

Mr. Allen was the third son and fourth child of Enoch and Betsey (Witter) Allen, who were married in 1794. They had five children: Asa Witter, born 1795; John, 1797; Eliza, (died young); Martin, 1807; and David, 1809. Enoch Allen was born in Windham, Connecticut, May 23, 1768. His father, Asahel Allen, was born in the same place in the year 1742. The Allen family were among the earliest of the New England colonists. Martin Allen is a direct descendent of Samuel and Ann Allen, of Bridgewater, Somersetshire, England, who located at Braintree, Massachusetts, ten miles south of Boston, in the early part of the seventeenth century.

Bryan McCullagh
I will attempt to shed light on the question posed by Tom, below:

The Samuel Allen represented by this profile is often referred to as "Samuel Allen of Braintree". His son Samuel is seen as "Samuel Allen of Bridgewater (Massachusetts)" https://www.wikitree.com/wiki/Allen-21. It has been conclusively demonstrated that they were father and son; see a discussion here: http://www.johnbrobb.com/JBR-ALLEN-R.htm.

But there is simply no evidence - circumstantial, suggestive, or otherwise - that this Samuel Allen had a father named George. This Samuel Allen's parents and origins remain unknown.

Tom Allen Hunter
Not meaning to argue nor offend but dispute are not proof and it is in my knowledge that dates and names can be inaccurate im not definitely sure if he is or isnt but i would need further proof there are more than one george so i leave that option open
posted Sep 12, 2019 by Tom Allen Hunter

Please read the Disputed Origins section at the top of the Biography. George is not the father of this Samuel.

Tom Allen Hunter
So if i am Understanding this there is substantiated proof that George is Samuel father and no proof he isn't and than which George belongs were. Is this correct or am i missing some thing.
posted Sep 05, 2019 by Tom Allen Hunter

Christopher Childs
Re: death of Ann (Unknown) Allen: 7th month in 1641 = September; Old Style dating, before the 1752 switch from the Julian to the Gregorian calendar -- so March is month #1.
posted Jun 19, 2019 by Christopher Childs
Richard Bisbee
Correction: The year for Anne's death was 1641, not 1644. But it looks to me like the 7th month, rather than the 9th month, or July rather than September, as written here under the "Marriage" title for Anne's month of death. The language is clearly 17th century, so sounds like an accurate record, no matter how many transcriptions from the original.
posted Jun 19, 2019 by Richard Bisbee
Richard Bisbee
"Sarah, the daughter of Samuel Allen and Anne his wife, was born the 30th of the 1st month 1639.

posted Jun 18, 2019 by Richard Bisbee
Richard Bisbee
There has been a confusion of two Samuel Allens. One had a wife Ann (Whitmore) Hulbert, Hulbird. He was aka Samuel Allyn born 1588 in Braintree, Essex, England and died 28 Apr 1648 in Windsor, Connecticut. The second Samuel Allen or Bridgewater had two wives. The first one was said to have been Ann by Nahum Mitchell in his Bridgewater history. However, that may have been confused with the other Samuel. The second wife was Margaret (French) Lamb. A daughter (Abigail) of Samuel by his second wife, married a Cary, as did five grandchildren by his first wife. Six Cary siblings married Allen relatives. Nahum Mitchell calls him "of Braintree" [before Bridgewater?] His second marriage is said to have been in Braintree, so I don't know if he could have moved after his m. Richard
posted Jun 18, 2019 by Richard Bisbee