“Thus out of smalle beginnings greater things have been produced by his hand that made all things of nothing, and gives being to all things that are; and as one small candle may light a thousand, so the light here kindled hath shone to many, yea in some sorte to our whole nation; let the glorious name of Jehova have all the praise.” -William Bradford

Gov. William Bradford was a passenger aboard the Mayflower and 5-time governor of Plymouth Colony.

Among the 30 Separatists who, with Henry Ainsworth, seceded from Francis Johnson's Ancient Brethren was Henry May from Wisbech, England. May had a 13-year-old daughter (or perhaps a sister - the records are not clear) named Dorothy. Three years after Ainsworth’s congregation had split with Johnson and the Ancient Brethren, William Bradford - originally a worshipper at Clyfton's church in Babworth, then a member of the Scrooby congregation and a voyager to Amsterdam, and among those who moved to Leiden with John Robinson - briefly returned to Amsterdam to marry Dorothy May.[5]

He married twice, first on 15 November 1611 in Leiden to Dorothy May[7] Marriage intentions were recorded on December 10, 1613 at Amsterdam, Holland.[6] William and Dorothy (May) Bradford had one son, John.

On 7 December 1620, Dorothy drowned in Provincetown Harbor after accidentally falling off the Mayflower.[8][9][10]

William's second wife was Alice Carpenter Southworth, a widow. They were married at Plymouth Colony on August 14, 1623. Two sons, William Bradford and Joseph Bradford, and one daughter Mercy Bradford, were born to the second marriage.[1][11] Alice had married first Edward Southworth, a say-weaver of Leyden, on 28 May 1613 in Leyden. Edward was born in 1590, the son of Thomas Southworth and Jane Mynne of Wells in Somersetshire. Edward and Alice had two sons, Constant and Thomas Southworth. The Southworths and William lived in Heneage House on Dukes Place in London for about a year before the Mayflower sailed, so were probably well acquainted. Edward died by 1621, probably in Leyden, after the Mayflower sailed. Two years later Alice left to join William in the new world.

John Bradford was left behind, but came to New England perhaps 20 years later.[1]

In addition to raising his own children, he also had his stepsons, Thomas Southworth and (Constant) Constance Southworth, growing up in his home. They were the children of Alice Bradford and her first husband, Edward Southworth.

"The last Will and Testament Nunckupative of Mr William Bradford senir: Deceased May the Ninth 1657 and exhibited to the court held att Plymouth June 3d 1657"

"Mr William Bradford senir: being weake in body but in prfect memory ... spake as followeth ... I have Desposed to John and William alreddy theire proportions of land which they are possessed of;

"My Will is that my son Josepth bee made in some sort equall to his brethern out of my estate;

"My further Will is that my Deare & loveing wife Allice Bradford shalbee the sole Exequitrix of my estate; and for her future maintainance my Will is that my Stocke in the Kennebecke Trad be reserved for her Comfortable Subsistence ..."

He appointed friends Mr Thomas Prence, Captaine Thomas Willett and Lieftenant Thomas Southworth to be Supervisors. The will was spoken by "William Bradford Govr the 9th of May 1657 in the prsence of us Thomas Cushman Thomas Southworth Nathaniell Morton" and presented in court 3 June 1657.

He was author of The History of Plimouth Plantation (Lost diary recovered 1846) Extensive diary helped historians interpret early Plymouth history. The original was found in the Bishop of London's library. Upon petition of the US Ambassador, the Consistory Court of the Diocese of London ordered on March 25, 1897 that the manuscript be delivered to the Ambassador for transmission to the Commonwealth of Massachusetts. Ambassador Bayard brought it to Boston and formally delivered it to the Governor on May 26, 1897.[20]

Y-DNA results I-Y21372[30] Previous Y-DNA testing Previous Y-STR testing through the Mayflower Society DNA Project and the Bradford surname DNA project Group 3[31] has indicated that the Bradford lineage belongs to the Y haplogroup I-M253, which is quite common in Northern Europe and Northwestern Europe. Plugging in the modal 111 STR values for the family into the Nevgen Haplogroup Predictor tool gives a prediction the family falls under: I-M253>DF29>Z63>BY151>BY351 with a 95.6% probability. NGS/WGS testing NGS/WGS testing of patrilineal (all male line) Bradford descendant(s) furthers refine the clade and can potentially differentiate between the branches of descendants. As of May 21, 2021 one Big Y-700 test result has been posted to the Mayflower DNA Project website. The haplogroup beyond BY351 to >BY3407>CTS2910>Y10994>Y21374>Y21371>Y21370>Y21372. 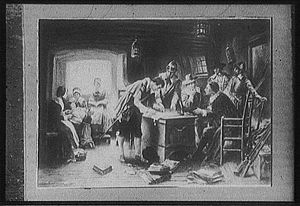 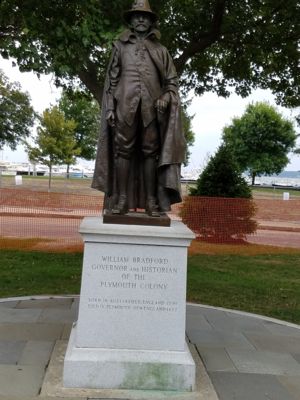 From "Of Plymouth Plantation" 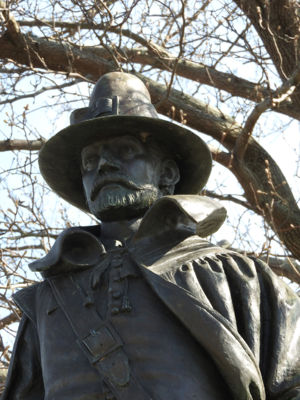 We plan on featuring William in the Connection Finder alongside Massasoit, the Example Profile of the Week, on November 25th. Between now and then is a good time to take a look at the sources and biography to see if there are updates and improvements that need made, especially those that will bring it up to WikiTree Style Guide standards. We know it's short notice, so don't fret too much. Just do what you can. A Team member will check on the profile Tuesday and make changes as necessary.

posted Nov 23, 2020 by Abby (Brown) Glann
Patricia (Long) Kent
One source for the yDNA Haplogroup: 1-M253 is mayflowerhistory.com/bradford-william (which is copyrighted) - this site also contains some nice pictures
posted Jun 15, 2019 by Patricia (Long) Kent
Raymond Wing
Another source for the Y-DNA Haplogroup of Gov. William Bradford (and his Y-DNA descendants) is at: https://mayflowerdna.org/wiki/index.php/Bradford_(Y-DNA) (also copyrighted).

Andreas (Basso) West
This page: http://mayflowerhistory.com/bradford-william/ states his Y-DNA as I-M253. WikiTree doesn't list any mtDNA or Y-DNA for him. Does anyone know where this source of his Y-DNA come from?

Also, has anyone identified him as him common ancestor in a triangulated group yet?

Elizabeth (Hart) Hyatt
Are we already working towards merging these biography headings? Clean up of source format and inline citations is needed. noticed a ibid in there as well. Would you post feedback to discuss current state of the profile progression or who is working on what? Thanks!
posted Aug 28, 2016 by Elizabeth (Hart) Hyatt