Edward Winslow is well known as a passenger on the Mayflower and one of the early leaders of the Plymouth Colony. He served three times as governor of the colony and was an assistant governor on numerous occasions. He was fervent defender of the colonies in New England and made several trips back to England to defend the colonies from opponents and to obtain much needed support. He also wrote a number of publications in defense of the colonies which greatly help our understanding of the settlement of the new world.

He was married twice, first to Elizabeth Barker and then to Susanna Jackson. His second marriage was the first in the newly established colony. He had five known children by his second wife, but only one son and one daughter survived to leave descendants.

In 1655, he was the chief of the three English commissioners whom Cromwell sent on his expedition against the West Indies to advise with its leaders Admiral Venables and Admiral William Penn, but died near Jamaica (Anderson says near Hispaniola) on the 8th of May 1655, aged 59y, 6m, 18d, and was buried at sea.

He was the son of Edward Winslow and Magdalen Oliver.

Married: 1st - Elizabeth Barker shortly after 12 May 1618 when their third marriage banns were published in Leiden, Holland.[4][5][6][7] She was recently shown to be the daughter of Samuel Barker of Chattisham, Suffolk, England.[8] She died testate on 24 Mar 1621 in Plymouth, Plymouth Colony.[9] They had no children.

Married: 2nd - Susannah Jackson on 12 May 1621 in Plymouth Colony. She was the widow of Mayflower passenger William White, and a daughter of Richard Jackson.[10] She was last known living on 18 December 1654 when named in the will of her husband.

"Edward Winslowe of London, Esquire, being now bound in a voyage to sea in service of the commonwealth...
to Josiah my only son [the entire estate] he allowing to my wife a full third part thereof for her life...
to the poor of the Church of Plymuth in New England...
to the poor of Marshfield where the chiefest of my estate lies...
my linent which I carry with me to sea to my daughter Elizabeth...
residue to my son Josias, he giving to each of my brothers a suit of apparell...
son Josias my executor...
my four friends Dr. Edmond Wilson, Mr. John Arthur, Mr. Jmes Shirley, Mr. Richard Floyd overseers for the rest of my personal estate in England...

Edward Winslow was baptized in Droitwich, Worcestershire, England. He was the oldest son of Edward Winslow and Magdalene Oliver. Four of his brothers would also immigrate to New England. His brother Gilbert was also a Mayflower passenger. John Winslow arrived the next year on the Fortune in 1621. His brothers Kenelm and Josiah did not arrive until 1631. Margaret, wife of Robert Hicks, is sometimes said to be a sister of these brothers; there is no evidence that this is true and is not accepted.

He attended the King's School of Worcester Cathedral from April 1606 until April 1611. He was subsequently apprenticed to "John Beale, citizen and stationer, for the term of eight years," on 19 August 1613, but left his master in 1617.[1] Shortly thereafter he removed to Leiden and joined the separatist congregation there.

At the time of his marriage in 1618, he was called a printer from London, England. It has been speculated that he assisted William Brewster and Thomas Brewer in their publishing of religious books.[12]

After a couple of false starts the Mayflower left Plymouth, England on 6 September 1620 for what was originally planned to be a journey to Virginia. Onboard were 102 passengers, including Edward Winslow. The historic voyage took 66 days, and on 9 November 1620, the Mayflower arrived at Cape Cod (well off-course). A decision was made, however, to remain at Cape Cod for safety rather than attempt to sail south to the area they were supposed to settle by the terms of their patent.

Immediately upon arrival some dissension broke out among the colonists. Since they were not settling in the area specified by their patent, some colonists felt they were no longer bound by the laws of England and the terms of the patent. An agreement was drawn up to help establish law, government and social order. The Mayflower Compact was signed while the Mayflower was anchored at Cape Cod (Provincetown Harbor) on 11 November 1620. It was signed by all free adult males and some, but not all, of the servants. Edward Winslow was the third male to sign.

A royal line to Edward III was proposed by John Hunt in 1965; however, this is not completely proven and is not accepted.[13]

The most recent and definitive study of the Winslow family is:

The focus of this book is in researching and correcting errors in the ancestry of Edward Winslow.

Y-DNA ResultsBY71464:[14] Previous Y-STR testing through the Mayflower DNA Project and the Winslow surname DNA project has indicated that the Winslow lineage belongs to the I-M253 Y-DNA haplogroup, which is quite common in Northern and Northwestern Europe. Next Generation Sequence/Whole Genome Sequence testing
As of April 2021 there are three patrilineal (all male line) descendants of the Winslow family from Droitwich who have taken the Big Y-700 test. One of these individuals descends from Gov. Edward Winslow, while the other two individuals descends from his brother, Kenelm. Their results document where the Winslow family clade/Haplogroup is I-M253>>Z61>S9939>>S11023>BY34545>BYBY34542>BY71464. In addition, the two descendants of Kenelm share an additional SNP not found in the descendant of Edward: BY108126.

Sponsored Search by Ancestry.com
DNA
No known carriers of Edward's DNA have taken a DNA test. 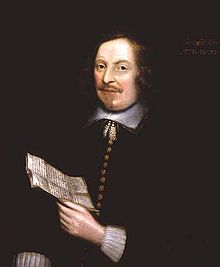 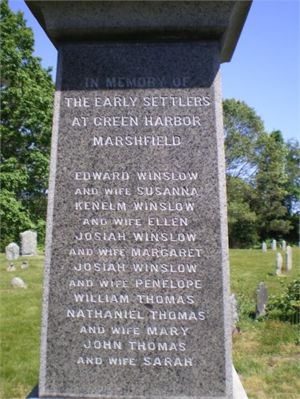 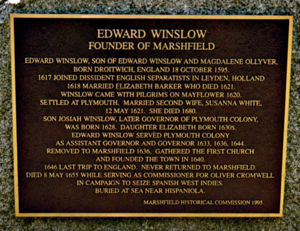 Coat of Arms of Edward Winslow 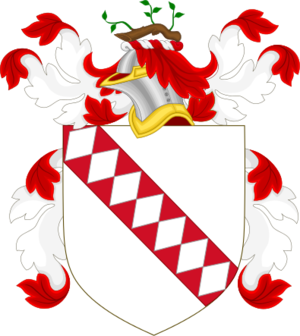 Joe Cochoit
Though this may be very close to being correct, the original marriage record does not exist. The best we can say is they were married very soon after 12 May 1618 when the third marriage banns were published.
posted Mar 17, 2021 by Joe Cochoit

S (Hill) Willson
I'm going to update this profile as necessary. Are there any additional sources anyone has that should be included?
posted Nov 23, 2020 by S (Hill) Willson

Joe Cochoit
It was updated for the last time this was a profile of the week.
posted Nov 23, 2020 by Joe Cochoit

Joe Cochoit
Yes, they have been checked with regard to Gov. Edward Winslow. What still needs improving is profiles in his ancestry. The profile of his father, for example, contains multiple errors. I may do some work on him today.
posted Nov 24, 2020 by Joe Cochoit

We plan on featuring Edward in the Connection Finder alongside Massasoit, the Example Profile of the Week, on November 25th. Between now and then is a good time to take a look at the sources and biography to see if there are updates and improvements that need made, especially those that will bring it up to WikiTree Style Guide standards. We know it's short notice, so don't fret too much. Just do what you can. A Team member will check on the profile Tuesday and make changes as necessary.

Joe Cochoit
I have begun updating the profile. The old one can be seen here until I make sure all data and appropriate sources have been incorporated.
posted Oct 28, 2019 by Joe Cochoit

Joe Cochoit
I will be substantially re-writing this biography, including reorganizing and expanding the biography and updating the references.

Joe Cochoit
William White-12582 is a different person than Mayflower passenger William White-506. He did live in Leiden, and he did marry Anna Fuller (who is not Susanna Jackson). It is important to keep these two different William Whites separate so the mistakes of the past will not be repeated.
posted Apr 07, 2018 by Joe Cochoit

Christine (Raffo) Zakary
William White-12582 needs to be disconneced from Anna Fuller as his spouse, and then merge the two William White. It's absurd that considering the expert evidence that now confirms Susanna Jackson as his wife (and mother of Resolved and Perigrene), that Wikitree is reluctant to separate the two. Why and what is the reluctance to follow standard Wikitree protocol regarding disproved spouses and ancestors?
posted Apr 07, 2018 by Christine (Raffo) Zakary