Asa Griggs Candler was born December 30, 1851 in Villa Rica, Georgia. He was the 8th child of Samuel Candler and Martha Beall. (As to the origin of his name: a neighbor in the 1850 census to the Candler family was an Asa Griggs noted as an instructor as seen in an image of 1850 census.)

Asa had but a small amount of formal education because of the economic conditions of the family after the Civil War and his father's death in 1873. Even without a formal education by 1870 he wanted to learn the pharmacist trade. He found Doctor Best and Doctor Kirkpatrick to teach him the trade over the next several years. He then moved to Atlanta to work in a drugstore. George Jefferson Howard, the father of his future wife, Lucy Elizabeth Howard, hired him for his drugstore.

Asa Candler was enumerated as self at Atlanta, Fulton County, Georgia for the June 8, United States Census, 1880. He was noted as a druggist, born 1852 in Georgia and married as seen in this image of the original census. Also included in the household are wife Lucy Candler, son Charlie U Candler, mother-in-law S C Candler?, other Fany Walker, other Ella Walker, brother John Candler and brother Noble Candler, as well as a host of boarders named Hall.[3]

Asa later formed a partnership, with Marcellus Hallman, under the firm name Hallman and Candler to set up his own drugstore. Candler began manufacturing his own "blood balm" and perfume at his drugstore. The store was such a success that Asa bought his partner's share and by 1887 had one of the largest drug businesses in the area. This included the manufacturing of patent medicines. But in a major move, he sold all his products for $50,000 and invested in the cola formula from Dr. John Stith Pemberton, the inventor and pharmacist. It was purchased for $2,300. Its manufacturing started small in a shed with Asa mixing the syrup himself. The first year 500 gallons of the syrup were sold. The Coca-Cola Company was formed in 1890. Asa developed it with his marketing techniques with famous aggressive marketing strategy. Asa spent a great deal of money on advertising the new drink. He placed the Coca-Cola name everywhere. He was a self-made man and an entrepreneur.

Making millions, he used the money for philanthropic causes, wanting to benefit humanity. He also developed the Central Bank and Trust Company, invested in real estate, donated to the Methodist church, granted land for Emory University, and donated millions for the building of Emory Hospital. He always felt education was very important.

Asa G Candler was enumerated as head of the household in Edgewood (excl. Atlanta city), Fulton County, Georgia for the June 25, United States Census, 1900. He was noted as a manufacturer (Coca Cola) and born December 1851 in Georgia. He had been married twenty-three years and was an owner as seen in an image of the original census. Also included in the household are wife Lucy E Candler, son Chas H Candler, son Asa G Candler, daughter Lucy B Candler, son Walter T Candler, son Wm Candler, servant Mollie Jones and son (of servant) Harvey Jones.[4]

In 1906, he built the Candler Building in Atlanta, tallest at that time. The building was 17 stories tall, located at Peachtree and Auburn Avenue.

A G Candler was enumerated as head of the household at 61 Elizabeth Street, Atlanta Ward 9, Fulton County, Georgia for the April 19, United States Census, 1910. He was noted as born 1852 in Georgia and had been married thirty-two years. He was president (C. Btlg. Co.) and an owner as seen in the image of the original census. Also included in the household are wife L E Candler and son Wm Candler.[5]

He turned the business over to his family in 1911. It was then sold in 1919 to a group of investors, including the Woodruff and Bates families of Atlanta for $25 million.

Asa G Candler was enumerated as head of the household at 1040 Ponce de Leon Avenue, Atlanta, DeKalb County, Georgia for the January 11, United States Census, 1920. He was noted as born 1852 in Georgia. He was widowed, an owner and a capitalist/president (bank) as seen in the image of the original census. Also included in the household are son-in-law Henry C Heinz, daughter Lucy C Heinz, grandson Henry C Heinz, granddaughter Elizabeth Owens and grandson William Owens.[6]

Asa married a second time in June 1923 to Mrs. May Little Ragin. She was a stenographer in his office building, at Atlanta, Georgia. May was age 35 (born 1888). She was a widow and had twin daughters, Julie and Mary (born 1913). May and Asa separated a year later and Asa filed for divorce. By November 1924, the situation changed, May moved back into Asa's home.

Asa had a stroke in 1926 and was in and out of Wesley Memorial Hospital, later to become Emory University Hospital. He remained together with May until his 1929 Georgia Death. The image of the Certificate of Death shows that he died from cerebral arteriosclerosis with associated inter-cranial hemorrhage. The informant was Howard Candler. His father is listed as Samuel Candler and his mother Martha Beal. The attending physician was T. L. Nolan.[7]

Asa G Candler is listed as the father in the Valdosta, Lowndes County October 2, 1936 Georgia Death of son William Beall Candler. The mother was listed as Lucy Elizabeth Howard.[8]

Asa Griggs Candler and Lemuel Oscar Motlow who was the heir of the Jack Daniel Distillery were 3rd cousins. They shared Great Great Grandparents Obediah Hooper and Massilva Marvula Brooks.

I wonder if they ever knew of the connection. A "Jack and Coke" really was meant to go together.

Sponsored Search by Ancestry.com
DNA Connections
It may be possible to confirm family relationships with Asa by comparing test results with other carriers of his Y-chromosome or his mother's mitochondrial DNA. However, there are no known yDNA or mtDNA test-takers in his direct paternal or maternal line. It is likely that these autosomal DNA test-takers will share some percentage of DNA with Asa: 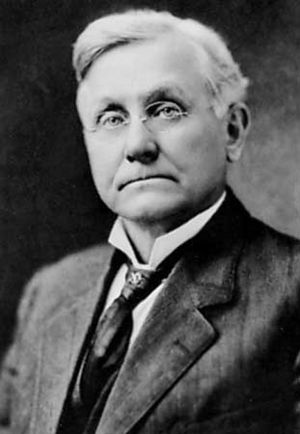 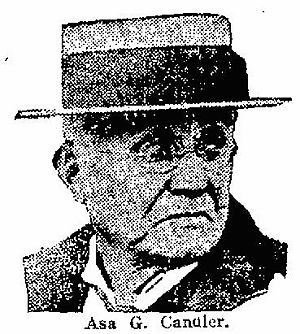 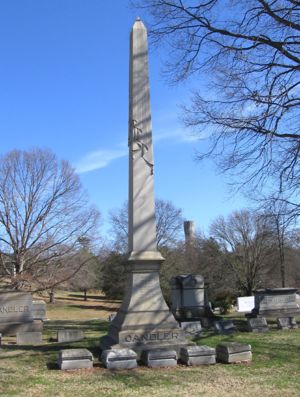 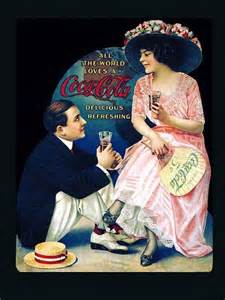