This profile is protected by the Puritan Great Migration Project. Removed as suggested parents Thomas Friar and Elizabeth Merritt. There is no evidence to suggest she was daughter of Margaret Merritt. Also detached from Thomas Frier and Elizabeth Hall as parents due to lack of evidence. Please contact the project through the comments prior to initiating any changes to the Data Fields and wait for a response before proceeding. Thanks.

Please refer to Edit Notes (below) with respect to presenting a cohesive view of what we know of Margaret.

Margaret Frier was baptised 25 June 1598 in Sherborne, Dorset. No parents' names given.[1]

A Walter Friar and Grace Mullins married in Sherborne in the right time frame to be her parents. (See image from Dorset record office)[2]

She probably died shortly after the 1636 birth of her last child.

"The surname Friar appears to have been first stated in print by the Rev. Joseph B. Felt, well over a century ago. Neither Dr. Gardner nor Mr. Moriarty was ever successful in finding Mr. Felt's evidence; but it would be well not to reject the possibility that Friar (or a variant) is right until we can either prove that the true name was something else or explain how the error arose."

And even if her maiden name was Friar (of whatever spelling variant), there is no documentation of her parents. Also:

"B. Margaret Friar: This is the name many times stated to have been that of that earlier wife of Thomas(1) Gardner whose existence is demonstrable from the allusion in his will, dated 7 Dec. 1668, probated 29 March 1675 [Essex Wills, file 301:62: Probate Records, 2:423], to his then wife Damaris, "mother-in-law" of the sons. Damaris was the Widdow Shattock who joined First Church, Salem, 2 July 1641. When the earlier wife died and the second marriage took place are unknown, but Damaris died on 28 Nov 1674, a month before Thomas(1) Gardner died in 29 Dec 1675. Thomas(1) Gardner's name appears fifteenth on the covenant of First Church, signed 6 of 6th month 1629, and a woman named Margaret Gardener is the next member of the family to join on "1639-24-1" [24 Mar 1639/40?]. On "15-10" in the same year, in any case later than the date of Margaret's admission, the name of Tho. Gardener Junyr appears. Though he was by this year certainly old enough to be married, and it is possible that Margaret was his wife, the baptisms of his children do not start until 28 Jan. 1643/4, so I am inclined to agree with Dr. Gardner and Mr. Moriarty that Margaret was actually the name of the earlier wife of Thomas(1) Gardner."

Margaret Frier may be the first wife of Thomas Gardner. See the discussion on his profile and see this article: http://thomasgardnerofsalem.blogspot.com/2014/09/thomas-and-margaret.html. If that article is correct her father would be Walter Friar (not Thomas Frier).

If it is proven that Thomas Gardner's first wife was Margaret Frier, then Margaret Unknown should be merged into this profile.

Also, see Edit Notes at Thomas Gardner. As well, we will expand this Edit Notes section for Margaret as we go along. This section will disappear after Profile work is accomplished. However, we will have notes appended to Research Notes with respect to pending research and updates. 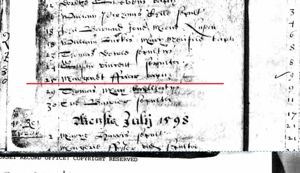 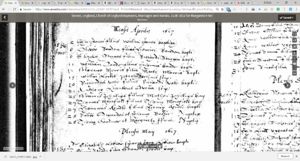 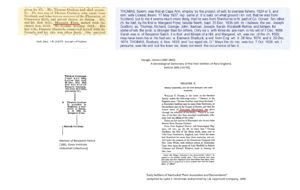 Cheryl (Aldrich) Skordahl
Please see g2g if you are interested in this profile; and before any further edits are made. Thanks.

Anne B
The alleged mother Elizabeth died in 1685. I she were really old say b. 1585, she would not be old enough to have this daughter b. 1598. Savage "speculated" that Margaret might be Thomas' sister, which is at least logical, although still speculation. I am highly in favor of disconnecting from these parents.
posted Jan 04, 2020 by Anne B

John M. Switlik
I set the 'uncertain' button as I cannot remove the parents.

We have a better alternative that needs a little more scrutiny.

Anne B
Ok thanks, As long as I know nobody minds, I can remove them. Will wait to make sure nobody on Thomas end minds.
posted Jan 04, 2020 by Anne B
M Cole
Margaret is PP, but it looks like there's agreement that her parents should be removed.
posted Mar 23, 2020 by M Cole

John M. Switlik
2nd thanks. I hadn't noticed that Thomas Fryer was in Savage's material.

The will of Walter Friar (image attached here) does have a Thomas as his son.

Margaret is mentioned, as well, but this is before the marriage to Thomas Gardner.

John M. Switlik
Isaac, It has the 'uncertain' button turned on.

Changes are pending. Walter and Grace have more pull. There is a will, albeit before the Thomas Gardner marriage.

posted Nov 27, 2019 by John M. Switlik
Isaac Taylor
What are we to make of the fact her bio currently includes this statement:

And yet, those people are currently linked as her parents?

John M. Switlik
We do not know Margaret's death date, at this time. Findagrave ought to point back to this WikiTree work for the couple. I put in a suggestion to that effect to the FAG record keeper. Thank you.
posted Jun 16, 2019 by John M. Switlik

Paula (Hawkins) Reinke
Dear Project manager, Please note there is a Suggestion that needs your attention! Thanks.

John M. Switlik
So we don't lose this link.

Should all of the children of Thomas Gardner-159 be detached from his second wife, Margaret ___?

I am wondering if John Gardner of Hingham is the John born in Sherborne, Dorset in December of 1624. After looking a little further, I will start a G2G.

There are Friers, in the town prior to this but didn't spot a Margaret

found. 1598 June 25 Margaret Friar bapts (Ancestry has her indexed for some reason as Margaret Lalane) same ref as above.

She is unlikely to have a mother born in Sussex

Jillaine Smith
Her LNAB is not in accordance with wikitree policies. We need a single spelling, not two.

Also, what is the "LRD" notation in her name?

And... can we find better sources? (There seem to be several on the profile of her husband.)

Kay (Johnson) Wilson
Frier-172 and Frier-125 appear to represent the same person because: These two profiles represent the possible first wife of Thomas Gardner-159. Until more evidence is provided it's too early to merge the wife currently attached to him with Frier-125. Please merge these two so that if it is determined she was the first wife, there's only one profile here representing her. Thanks!
posted on Frier-125 (merged) Jul 24, 2016 by Kay (Johnson) Wilson